You are here: Cyborg5 Home > CY's Faith Formation > The Riddle of the Blood of the Lamb

When I teach RCIA classes at St. Gabriel Church, there are two lessons which I call my “guaranteed failure” lessons. In the first, my task is to teach the entire Old Testament in one 90 minute class. I guarantee that I will fail to do so. The following week I’m supposed to teach the entire New Testament in a single class and I similarly fail. But I tried to hit the high points of each.

One of my favorite parts of my New Testament lesson is a section where I’m describing John’s approach to Jesus. One of the terms he uses is “Lamb of God”. A lamb is an animal used in the Passover sacrifice and by describing Jesus as God’s Lamb he is saying that Jesus is God’s sacrifice that saves us. In John’s vision of what it’s like in heaven as laid out in the Book of Revelation he refers to the Lamb.

The Book of Revelation is sometimes called the book of the apocalypse. In Revelation 7:1-17 John is literally describing the apocalypse as seen from heaven. The Angels are commanded not to destroy the world until the believers have been saved and accounted for. The angel marks the seal of God 144,000 people. That is 12,000 from each of the 12 tribes of Israel. There are some denominations which take this passage so literally they believe that only exactly 144,000 people will make it to heaven out of all of the billions who currently live or who have ever lived. I think I’m a pretty good person and assuming I don’t screw up my life any worse than it already is my really plan on making it to heaven. But to be one of only 144,000 out of everyone who ever lived… I’m not too fond of those odds 🙂

Most Scripture scholars will tell you that numbers in Scripture almost always symbolic and not to be taken literally. In particular the number 12 is used to describe “the people of God” because in the Old Testament you were among the 12 tribes of Israel, you were one of God’s people. So the number 12 means “everybody”. Given that interpretation the number 144,000 might best be described as “everybody times everybody times 1000”. It’s John’s way of saying everybody. Yes I mean really everybody. I really really really mean everybody. Get it?

I generally buy into the “numbers are symbolic not literal” school of thought but there is an alternative explanation for that number. If we had 12,000 from each of the 12 tribes as the passage says, you could literally think that of the original 12 tribes of Israel in Old Testament days there might only be 144,000 of that population in heaven. I might be able to buy that argument of literalism were it not for the next passage says “After this I had a vision of a great multitude, which no one could count, from every nation, race, people, and tongue. They stood before the throne and before the Lamb, wearing white robes…”

One of the elders in heaven then asked John who are these people in the white robes. John’s attitude is “You are asking me? I’m just a visitor here. You should know.” The elder says in verse 14 “These are the ones who have survived the time of great distress; they have washed their robes and made them white in the blood of the Lamb.”

“… made them white in the blood of the Lamb” 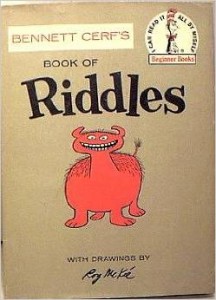 Okay wait a minute… The first time I heard this passage I had a flashback to when I was five years old. For Christmas I received a book titled “Bennett Cerf’s Book of Riddles”. It was a children’s book full of riddles designed to make five-year-olds giggle with glee and I did many times (and still do when I think about it). Among the gems were…

Q. What’s big and red and eats rocks?
A. A big red rock eater (seen on the cover image on the right)

Q. What’s big and blue and eats rocks?
A. No… They only come in red.

They never did tell you what was big and blue and ate rocks but it didn’t matter because you were giggling at that point. Anyway on with our story… One of the riddles was “If you put a white hat into the Red Sea, what will it become?” Of course every five-year-olds says “Red” but the answer is “Wet”. And you’ve just taught geography to a five-year-old by explaining that the Red Sea isn’t really red. Later in life I learned that Indiana geography is just as messed up. White River isn’t white. South Bend isn’t south. North Vernon isn’t north. And French Lick is not all as wonderful as its name implies either.

So when the Book of Revelation says that white robes were washed in Lamb’s blood and made allegedly whiter… I said “wait a minute… This is another one of those Red Sea jokes is its?”

This riddle remained unanswered to me for many, many years until one day I was sitting at my kitchen bar eating lunch with my mom and watching TV. We were flipping around the dial looking for something to watch (pre-cable only four choices) and ended up landing on a cooking show on PBS. The show was called “The Frugal Gourmet” and featured a gourmet chef named Jeff Smith. Not only is he a chef, is also an ordained minister. He starts telling the story about lambs and adoption and sacrifice etc. and I said to my mom “Oh my God that explains it! I now understand how being washed in the blood of the lamb makes you cleaner!” And I told her the whole story about how I never knew how to explain that an RCIA and the story about the Bennett Cerf riddle book to which she of course said something like “How the hell do you remember a joke out of a book when you were five years old?” I just never forget a joke I guess.

The problem was… I didn’t think I could remember his explanation. It must not have included a joke. As I said this was in the pre-cable area of television and thus very much pre-DVR. I might’ve had a VHS VCR in the living room but the odds that I would’ve been recording that show would be zero. So there was no way to back it up and hear the explanation again or take notes.

At the end of the show they promoted his book “The Frugal Gourmet Cooks with Wine” which you could get from PBS or your local bookstore. The next time I was in a bookstore and looks for it and found a paperback. Much to my joy it contains the story he had told on the air. Now every year when I teach the RCIA lesson on the New Testament I tell the entire above story and then read the following passage from “The Frugal Gourmet Cooks with Wine”. Hopefully it’s brief enough to qualify as fair use.

Quote from “The Frugal Gourmet Cooks with Wine” — “The image of adoption was connected with the image of blood… But see this! In the old shepherding communities, all would have understood this image because all knew the problem of the shepherd. He would check his flock in the morning and find a new lamb. . . but the mother had died during the night In another portion of his flock he would find a mother, sitting silently beside her child stillborn during the night. The mother would die of a broken heart and the orphan would die from lack of sustenance. All logic would tell you to put the orphan under the care of the childless mother. . . but the two would know they were foreign, and they would not accept each other. The moment of wisdom came when the old shepherd, this old Jewish philosopher and theologian, would see in this event the nature of our relationship to the God We are so separated from God, he said, that God is dying of a broken heart and we are dying from lack of sustenance. And it seems that nothing can be done. We are foreigners to one another. But one thing can be done. It is still being done by shepherds. If you slit the throat and drain the blood of the dead baby and wash the orphan in the blood of the lamb, the living mama smells her own and moves around so that the orphan can suckle, can come home to the table. This image of the blood of the lamb being the symbol of adoption was common in the early traditions, and it remains common in the Church.”

So now it all makes sense. Because we are washed in the blood of the Lamb of God we are made worthy to be in his presence in heaven with John and the elders and the Angels were going around stamping people on the head and doing robe laundry.

Whenever someone is baptized as an infant we always dress them in white garments. As adults when we baptize we give them a white garment. In the baptismal rite there is a line that says something about “Receive this white government and bring it unstained to the judgment seat”. This is the Scripture passage to behind that prayer.

Epilogue: Recently I began to blog about all the various wheelchairs I’ve owned over the years. I’ve been blogging about it in preparation for a new wheelchair I will be getting soon. While looking through photos of me in the old wheelchairs I found this one shown below from Christmas 1960 showing me proudly holding the now famous Bennett Cerf’s Book of Riddles. You can click on the image to see it larger then you can see the cover matches the one I showed above. Just for fun (and to check out the publication date on the book) I did a search on Amazon.com and found several used book resellers had copies in reasonably good condition for sale. While writing this blog, I couldn’t resist anymore and I ordered one which was shipping was just over $12. Maybe later in the book and answers the big blue rock eater question and I just don’t remember but I’ve not got my hopes up. I will post a comment here with the book arrives. 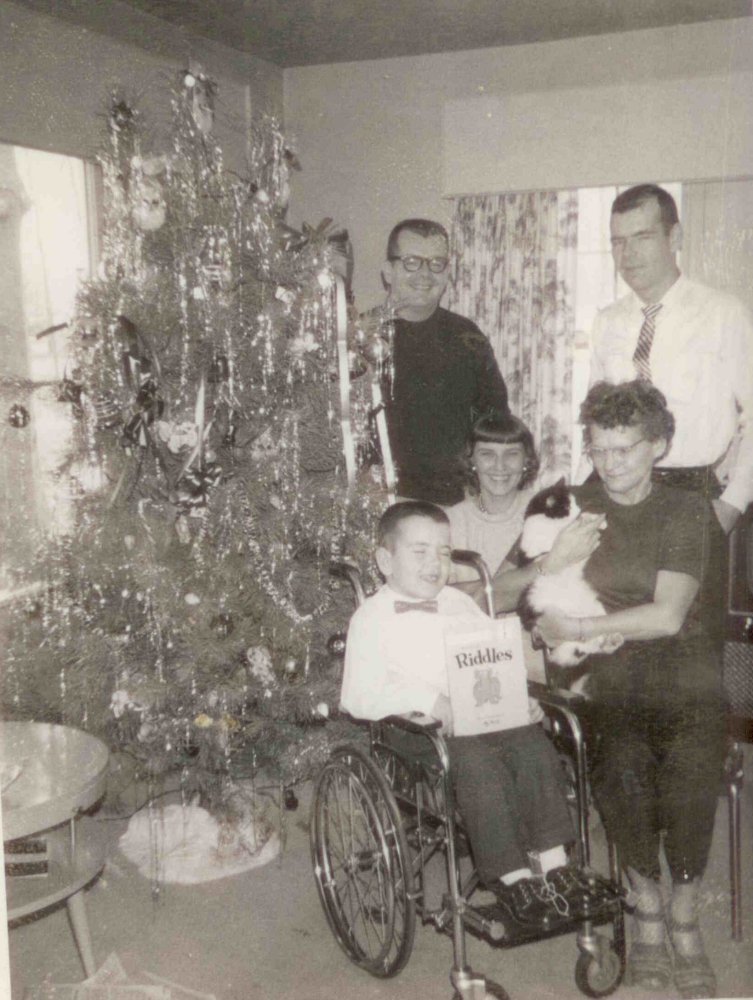