You are here: Cyborg5 Home > CY's Faith Formation > What If “The Nine Billion of God” Is True?

Spoiler Alert: This blog post contains spoilers for the classic sci-fi story “The Nine Billion Names of God” by Arthur C Clarke and the science fiction short story “The Egg” by Andy Weir. 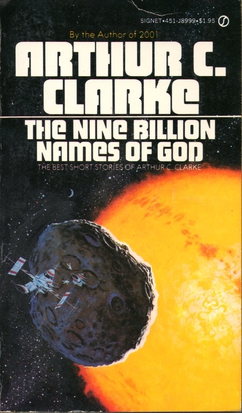 In 1953, Arthur C. Clarke published what is now a classic science fiction story titled “The Nine Billion Names of God“. The premise of the story is that two western computer programmers are hired by Tibetan monks to program a computer to print out all of the possible names of God. The program will eliminate certain combinations of letters that make no sense in any language. It would’ve taken them thousands of years to write it out by hand but the computer will finish printing it in a matter of days. They estimate that there are 9 billion such combinations. It is their belief that once they have enumerated and printed every possible name of God, it will bring about the end of the world.

You can read the Wikipedia article about the story by clicking on the story name in the previous paragraph. It will tell you all the various awards and accolades the story has earned as well as a spoiler for how the story ends. I read the story in an anthology of Clarke stories sometime in the 1970s and it has been a favorite of mine ever since.

Recently, I began reading the works of Andy Weir most noted for his breakthrough 2011 novel “The Martian” which in 2015 was made into a hit movie “The Martian” starring Matt Damon about an astronaut who is stranded around on Mars for two years.

One of the most popular short stories by Weir is “The Egg” which you can read online here. Massive spoilers here as well. The story is a first-person account of a conversation between the narrator who claims to be God and a recently deceased human being. God informs them that they are going to be reincarnated. In fact, everyone who’s ever lived is reincarnated. Furthermore, the individual being addressed by God has been reincarnated millions of times and will continue to be reincarnated many more times. In fact, everyone who has ever lived is a reincarnation of the same individual. God informs them that once they have experienced being reincarnated as every human being who ever lived (including people like Einstein or Hitler on opposite ends of the spectrum) that then they will become a God as well.

In the story “The Egg”, God tells the human…

In Paul’s first letter to the Corinthians chapter 12, he expounds upon the gifts of the Holy Spirit. He’s writing in response to a controversy in the city of Corinth as people are complaining that certain spiritual gifts are more important than others. He’s trying to explain that regardless of what one’s role is in life, they have the capability (and duty) to use their spiritual gifts for the common good. He uses the analogy of the parts of the human body all having to work together to make the body useful and that no one part of the body is insignificant. “If [one] part suffers, all the parts suffer with it; if one part is honored, all the parts share its joy. Now you are Christ’s body, and individually parts of it.” 1 Cor 26-27.

Essentially Paul is saying the same thing as Weir. Combined together, all of human beings are God.

A “name” is a symbolic representation of an object, person, or concept. If human beings were created in the image and likeness of God then each of us is a symbolic representation of God. In essence, each of us is a way to name God. And if Clarke is right, and Weir is right, and St. Paul is right… Sometime in the year 2037 we will have manifested in the human population 9 billion ways to name God. And maybe, we will then hatch from our Egg of the universe and be united as God.